When corporations control what you see… 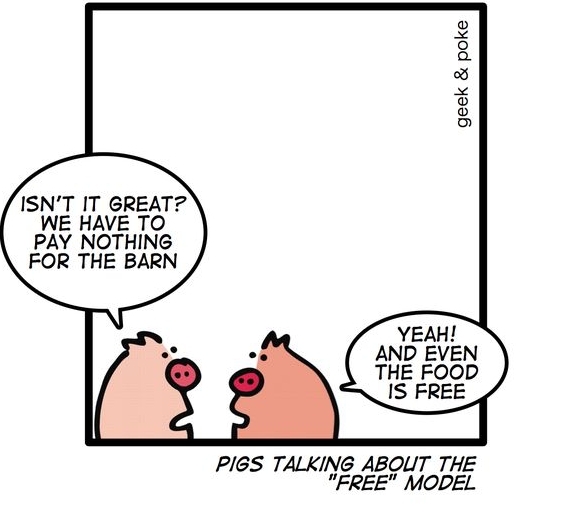 This week I’m trying a slightly different approach to the list of links for our Indie roundup. Please let me know what you think! Starting us off, this week I wrote my regular column for A List Apart on ‘The Illusion of Free’. It’s an introduction to the privacy issues of corporate surveillance for others living in the convenient and infectious tech bubble.

We’ve covered a lot about corporate surveillance and the sale of user data, but what happens when the corporations tracking your data also choose the content you see? Two stories this week, one from Facebook, and one from Google, present worrying situations. Facebook is trying to own our news and communications by hosting news content and integrating its messenger into news sites. As Ben Werdmüller explains in his post, news distribution controlled by one entity is potentially harmful enough, let alone when you look at the potential for censorship and skewing the content you choose to show to particular individuals.

Twitter have also started rolling out a “quality filter” option for its feeds. While this is great news for dealing with trolls and abusive behaviour on Twitter, it comes with the considerable problem of who decides what constitutes a “quality” tweet. If tweets of poor quality are from regularly-reported and blocked tweeters, it opens the reporting and blocking tools up to potential abuse as seen with DMCA takedown requests. If the decision is taken by an algorithm or Facebook-like filter based on relevance, tweets could be biased, censored, or intentionally leading.

Welcome To Privacy Hell, Also Known As The Internet Of Things on Fast Company looks at the security issues surrounding The Internet of Things. When terms and conditions are made so hard to understand, we’re usually completely unaware of what the Internet of Things is sharing about us. Senr.io™ aims to change that with security visibility for mobile and internet connected devices: “Senr.io™ is like “Anti-Virus”, “Credit ”, and & “Consumer Reports” for the security of Mobile Apps and internet connected devices.”

The unnecessary sharing and insecure storage of people’s data doesn’t just open it up to interception by governments, but also other parties who may have malicious intent. And while we’re on the subject of mass surveillance by governments, it’s well-worth reading an excerpt from Bruce Scheneier’s book, Data and Goliath, published on Digg this week. It’s all about Why Mass Surveillance Can't, Won't, And Never Has Stopped A Terrorist. As mass surveillance is still going strong, we need to ensure our rights are protected, and that’s why, this week, the Electronic Frontier Foundation (EFF) has told the UN they need a privacy watchdog:

“The right to privacy is one of the few civil and political rights without specialist attention from a United Nations mandate holder. Privacy is an independent right, enshrined in a variety of international human rights treaties. There is a pressing need to better articulate the content of this right as part of international human rights law and produce guides on its interpretation, particularly as modern technologies are enabling communications surveillance—and consequent interference with this right—on an unprecedented and damaging scale.”

This advice comes at a time where the European Commission warns us EU citizens that Safe Harbour can’t ensure the privacy of EU citizens’ data when sent to the US by American internet firms. “You might consider closing your Facebook account, if you have one,” suggested European Commission attorney Bernhard Schima.

A few weeks ago I read about Canary Watch. Governments often demand data from communications services, such as social media or phone companies, that are in possession of our call data, emails, files, private messages, and other non-public information. When they issue a surveillance order in this way, the government will usually issue a gag order to prevent the company from telling its users that its security has been compromised. A warrant canary is when a company regularly publishes a statement saying that they have not been compromised by a government request. When this canary is removed from their site, people can infer that their data could have been compromised. However, there are many problems with warrant canaries that are explained in Warrant Canaries and Disclosure by Design: The Real Threat to National Security Letter Gag Orders by Rebecca Wexler. A company could be forced to falsely publish a canary, the people tracking the canaries could be compromised, and this type of “design by disclosure” could be anticipated by governments, and be regulated in itself.

The Billionaire’s Typewriter by Matthew Butterick looks at Medium beyond the think pieces and pretty typography, thoughtfully explaining how “Medium’s main prod­uct is not a pub­lish­ing plat­form, but the pro­mo­tion of a pub­lish­ing plat­form. This pro­mo­tion brings read­ers and writ­ers onto the site. This, in turn, gen­er­ates the us­age data that’s valu­able to ad­ver­tis­ers.”

When business models are built around data, it’s usually because startups are trying to recoup money to pay back their venture capital investors. Tech startups are a high risk game for investors, and as this Forbes article points out, very few startups ever get funded in this way. And maybe it’s just not worth the money. On Entrepreneur By Design, Nick prudent shares The Problem With Investors that startups don’t want to admit. Alyssa Mazzina of Snappy also covers these issues in a fantastic series on the benefits of bootstrapping a business in The Cost of VC Money: Reason Number 2: Loss of Control and The Cost of VC Money: Reason 3: Loss of Freedom.

And to round off this week, have you tried DuckDuckGo yet? It’s a fantastic, and beautiful, search engine that doesn’t track you. Tom Wood has written about A Year of DuckDuckGo and the benefits he’s experienced.